Aspects of the Vauxhall Crossing

[20Dec21] The Part 1 and opening Part 2 course material dealt with how early landscape photography inherited traditions from painting, particularly the concept of the sublime; the divergence between artistic and ostensibly technical or scientific landscape photography that caused friction between what Grundberg refers to as the “connoisseurs” and the “contextualists” (2020, p.222); and the gradual reinterpretation of sublime over the subsequent 170 years. I took issue with Morley’s idea of the sublime in Staring into the Contemporary Abyss (2010) as being both elitist and too diffuse (Blackburn, 2021a).

As my own concept of the sublime applies more to musical than to visual stimulus, I borrowed an idea from Lara Maiklem’s Mudlarking (2019), where she praised the figures on the outside of Vauxhall Bridge, not visible to motorists and only glimpsed by pedestrians. Eight bronze statues, double life-size, each depicting a female character in a role of work or culture. The wish to see them had remained with me since reading the book and this, combined with my view that one of the important purposes of photography is to reveal to the viewer that which otherwise may be unseen, made the Bridge my first choice of subject.

It is unfortunate that one bank of the Thames at Vauxhall is closed to pedestrians until 2024 because of the Tideway sewer works (Russell, 2020). This means that any simple documentation of the eight statues is impossible. In my initial meeting, my tutor, quite sensibly, stated that I should research the subject before photographing it (needless to say, I had already started) and that has led to a more considered and diverse range of images. I have also written a brief history of the crossing, included as an appendix to the submission.

Four visits were made to the site, including one after dark to see whether the figures were still illuminated (unfortunately, not for some time, it seems). Two of the daytime visits were after the crossing’s history had been researched and so I had a clearer idea of what might be available to photograph. The weather conditions varied but were never ideal or even pleasant.

I took a late decision to convert my photographs to black and white, largely to diminish the impact of the differences in skies on the various visits. Wherever black and white photography is concerned, one of my major influences is Bill Brandt for his choices of subject and his composition, especially the middle years before he abandoned grey almost entirely. With any urban landscape, another key influence is Michael Kenna’s architectural work where he often concentrates on a detail of the subject and equally will work from a distance to show the context.

I regard this submission as aesthetically and technically sound but inevitably incomplete until the sewer works end and full access to the site is possible. The bridge’s statues were the object of the project and I sought to show their arrangement, scale and detail, concentrating on the Pottery figure as my example as it was the most accessible. I also illustrated the bridge’s locational context, the limited historical remains still visible, incidental river wildlife and nearby cultural associations. 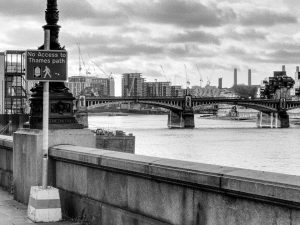 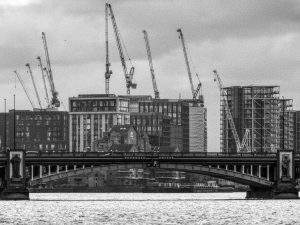 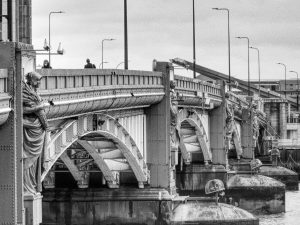 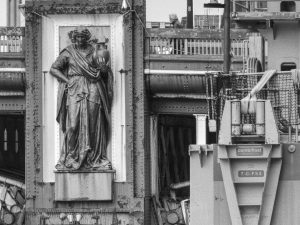 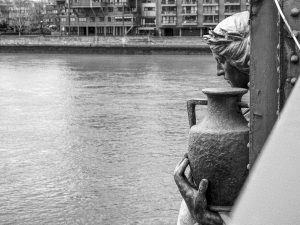 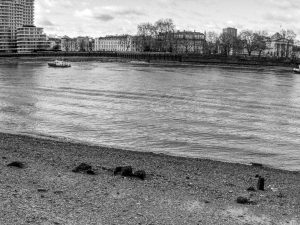 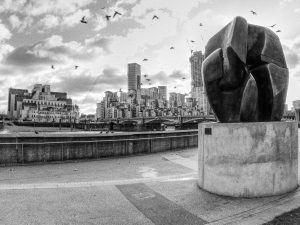 The headline image with two birds in the foreground, framed by bridge arches, reveals much of what there is to learn about the Vauxhall crossing: once attention moves from the birds, the bridge’s name can just about be read; and two of the statues seen; the environs are crowded with residential housing; building work is in progress; and back to the birds, wildlife manages to survive in metropolitan London, but it is tagged and recorded and probably regulated. The remaining images add to the detail.

Most of the photographs are strong enough † to stand alone, the exceptions being B1 and particularly B6 which benefit from explanations and only stand as part of the series.

There are five new Learning Outcomes for LPE:

L01 visual and conceptual strategies – I intend to photograph urban landscapes for LPE for a variety of logistical and accessibility reasons and Assignment 1 is the first example. My usual approach, as mentioned in the introduction, is to identify a main object then explore both its detail and its wider visual context.

L02 social, cultural and ethical considerations – following on from L01, I will seek engage with these issues in future Assignments. The only human components in this Assignment are pedestrians included to emphasise the size of the bridge sculptures.

L03 exploring a range of ideas – Vauxhall Bridge was the only target actually photographed for this assignment, although a number of approaches to the task were considered. The progress and thought processes during the project are described in the online blog (Blackburn, 2021b).

L04 research, managing time and resources – as noted in the Course Guide, Assignment 4 will be the main evidence on this one. Following a tutor prompt, the history of the Vauxhall crossing was researched for this Assignment and forms an appendix to this submission.

L05 autonomy, voice, and communication –
personal autonomy is always my preferred approach;
I am communicating with my fellow students whenever possible, currently in monthly Diversity & Inclusion training and the LPE Chat Group;
my current thought on voice is, “You’ve found your voice when you stop trying to please other people” (Blog, 19th December (Blackburn, 2021c)).

† “strong” combines some of:
Technically competent (no distracting technical “errors” unless intentional);
Aesthetically pleasing or arresting (perhaps as regards the composition, or the contents of the image if the arrangement is enforced by circumstances); and
The subject matter having potential for stimulating viewer interest.
All these measures are entirely subjective and the list is not exhaustive.

A History of the Vauxhall Crossing

There have been two relatively recent bridges on the site, before that a ferry and before that there is evidence of an earlier wooden structure, (Stone, n.d.). The Sunday-only ferry crossing serviced Vauxhall Gardens, a public pleasure garden that operated for 200 years before financial failure in the mid 1800s (Coke, 2007).

The previous bridge was conceived in 1809, when Act of Parliament was passed allowing a public company to raise the money to build it. Originally called the Regent Bridge for the Prince Regent, it was speculative, in the hope of new suburbs arising in the area. The design went through three rejected versions before a nine arch iron bridge by James Walker was built, opening in 1816 and by then renamed Vauxhall Bridge (fig. C1).

The current bridge, which opened in 1906, was needed because increased traffic flow had weakened the supports in Walker’s bridge (Stone, n.d.). In this case too, the design went through a series of modifications before the five-span iron bridge on granite piers by Sir Alexander Binnie and Maurice Fitzmaurice was built (Pudney, 1972).

The bronze figures were something of an afterthought, after complaints were made about the sparse bridge design. Several options were considered and eventually Alfred Drury and Frederick Pomeroy designed four figures each, Education, Fine Art, Science and Local Government by Drury facing downstream and Pottery, Engineering, Architecture and Agriculture by Pomeroy, upstream (Matthews, 2008).

One of the problems in building the second bridge was that the tunnels allowing the former River Effra to flow into the Thames had to be relocated (fig. D2). These tunnels are currently obscured by the riverbank building works (figs. D3, D4) that restrict access to the south bank.

From 1898 to 1906, while the new bridge was being built (figs. D5-6) and also during WW2, in case the Vauxhall Bridge suffered significant bomb damage (Millbank Bridge fig. D7), temporary structures, were built nearby (Clark, 2016 and Coates, 2017).
There is a Henry Moore sculpture, Locking Piece (1963-64), on the embankment close to where the Millbank Bridge had been (fig. D8). There is no indication of a link. The sculpture is on loan to the city from nearby Tate Britain.

In 1963 a new structure was proposed, the Crystal Span, seven stories of offices, shops, a gallery, a theatre and parking space atop a new road bridge (fig. D9), “but in the end, the London County Council declined to pick up the estimated £7 million (£132 million in 2017) construction costs, and the scheme was abandoned” (Mansfield, 2017).

In 1993, erosion uncovered wooden posts dated to between 1550 BC and 300 BC on the riverbank, near the northern River Effra outlet. It is thought unlikely that a wooden bridge across the river would have been built at that time, but they might have been supports for a jetty or a shorter bridge to a central island. Mansfield (2011) described a visit to the site that also examined what was thought to be a fish trap. Mansfield notes that serious additional erosion had taken place (and that was 10 years ago in a 2011 report) and that the posts are only visible at very low tides (fig. D10).
Tide tables at the location are available online (fig. D11, WillyWeather, 2021).

Mansfield, I. (2011) A trip with the archaeologists on the River Thames [online]. ianvisits.co.uk. Available from https://www.ianvisits.co.uk/blog/2011/02/20/a-trip-with-the-archaeologists-on-the-river-thames/ [Accessed 13 November 2021].